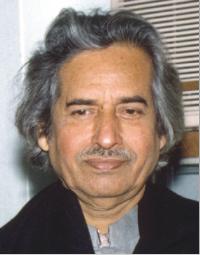 Jogen Chowdhury was born in Faridpur, Bangladesh, in 1939. The family moved to Kolkata after the Partition. A student of Prodosh Das Gupta, Chowdhury worked in an expressionistic style of figuration in his early years. A three-year sojourn in Paris reshaped his thoughts as he worked to arrive at a distinctive personal style. Chowdhury’s art is rich in suggestions. He interprets the human form as attenuated, exaggerated, fragmented, reconfigured and rephrased, thus intensifying its visual and conceptual expression.

Considered and eminent and important Indian painter of this century, Chowdhury believes art in India is neither subsumed in the miniature traditions nor in those of Ajanta, for India is neither a monolith nor a static entity; and that a notion of Indianness should not be fixed into some kind of timeless loop. He has been awarded the Madhya Pradesh government’s Kalidas Samman and at the 2nd Havana Biennale in Cuba. Chowdhury is a professor of painting at Kala Bhavana, Visva Bharati, and lives and works in Kolkata and Santiniketan.