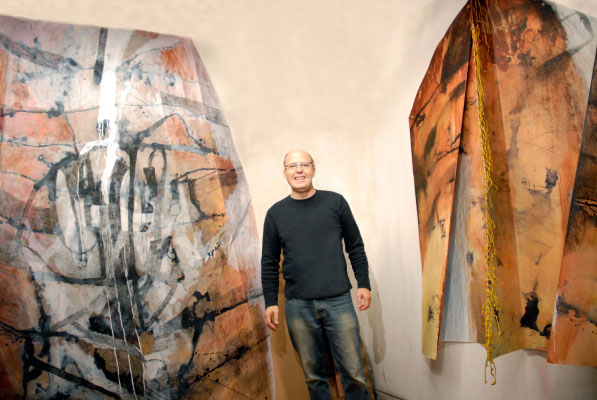 Originally from Grosseto-Prugna in Corsica, he studied art in Paris and in particular at the École normale supérieure of Cachan in Arts and Design. Meanwhile, he created theater costumes and sets. His work develops in the form of drawings, engravings, paintings, volumes, installations and photographs. At the beginning of his career, he made many engravings in size which he drew himself or Robert Frélaut at the Atelier Lacourière-Frélaut. Lucien Curzi, art critic in the catalog dedicated to this artist in 1993, spoke of “Work with Black.” The National Library of France keeps in its collections five prints of this first series. Prize of the young engraving in 1988, he presided the exhibition of “Trait-Graveurs today”, ten years. On this occasion, he organized exhibitions and international exchanges with Ireland and Quebec.

In 1997, the Fesch Museum in Ajaccio did a retrospective of the last ten years of his work which presented a set of drawings, engravings and paintings. His work was presented abroad in 1996 and 2001 at the Taylor Galleries Dublin, Ireland. At the Madeleine Lacerte Gallery in Quebec City in Canada in 2002 and at the Orange Gallery in Montreal in 2006. Bernard Levy, editor-in-chief of the magazine “la vie des Arts” in Quebec, entitled her work “of Intimate and Universal Archeology”. This set was the starting point for all his future endeavors.His personal exhibition in 2004 at the Bengal Foundation in Dhaka, Bangladesh was organized by the Ministry of Foreign Affairs in the framework ofRecent works challenge the relationship with drawing, its nature, its meaning, which is questioned by the mediums implemented. From 2009, this unique approach is accompanied by photographs entitled “In Situ” of drawn works, developed and installed in places of memory as at the Cathedral and the Collegiate Church St André de Chartres in 2013, in the old military hospital Valère-Lefèbvre in Raincy or abandoned industrial premises.

His latest works are entitled “Body Agreements”. They consist of shots and volume traces of stagings of related events in symbolic driven body.