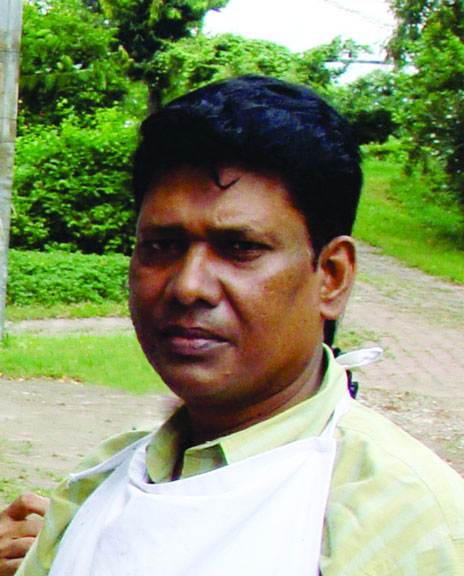 Iftikhar Uddin Ahmed’s works are a dialogue between the past and the present, marked by an intelligent use of broken lines, doodles and textures. The element of time is manifest in the presence of wheels, broken pillars, clocks, and keys, in his semi-abstract compositions.

Iftikhar Udin Ahmed was born in Dhaka in 1960. After completing his master’s in Drawing and Painting from the Institute of Fine Arts in 1986, he availed a French government scholarship for higher study in modern painting at Académie de la Grande Chaumière, Paris, France (1993 – 1994). Ahmed’s awards include First prize in Painting, Artists of the World, Galerie Bennanos, Paris (1994), Honourable Mention Awards in the 9th Asian Art Biennale (1999),  Bangladesh Charushilpi Sangsad Biennale (2000) and the National Art Exhibition (2001). Iftikhar was a member of the group that won the Swadhinata Stambha mural design competition in 2001. Other awards include Special Commendation, International Exhibition of Art Murals, Metropolitan Art Museum, Japan (2003), and Award of Excellence, Las Vegas Art Museum, Nevada, USA (2005).  Iftikhar Uddin Ahmed is a freelance artist who lives in Canada.