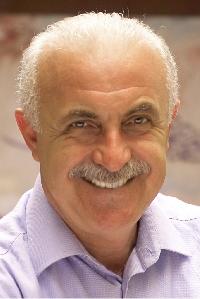 Hikmet Barutçugil was born in 1952. In 1973, as a first year student at the Department of Textiles, School of Applied Industrial Arts, Barutçugil, while starting to study Hüsn-i Hat (Islamic calligraphy) under the guidance of his professor Dr. Emin Barın, first encountered Ebru, for which he quickly developed a burning passion. After receiving his degree in Textile Design in 1977, Barutçugil decided on career in Ebru and carried his interest to London, where he conducted his postgraduate studies in abstract art between 1978 and 1981. Barutçugil transfused progressive methods with the classical manners of Ebru and applied time-tested motives of this decorative art on a multitude of functional media, e.g. interior surfaces, gadgets, and clothes, thus introducing the majestic beauty to the general public. His technical trials resulted in a unique line of Ebru, now known by his name as Barut Ebru.

Barutçugil has contributed to hundreds of events and exhibitions on traditional arts, given short-term courses and seminars in the USA, Canada, Germany, the Netherlands, Denmark, Spain, Austria, England, Egypt, Tunisia, Sweden, Syria, Jordan, Pakistan, India, Bahrain, and Iran to encourage re-emergence of Ebru in the minds of art lovers. He has lectured at the Royal College of Art (London, UK), Internationale Gessellschaft für Musik-Ethnologie und Kunstheraphie Forschung (Wien, Austria), The Otonom University (Madrid, Spain), The University of Graz (Graz, Austria), The Basel Paper Museum (Basel, Switzerland), The University of Massachusetts (Boston, USA), and The Lok Virsa Museum (Islamabad, Pakistan). During this journey, he has also provided a multitude of articles for newspapers and magazines, attended numerous TV programs and received numerous awards. He has given 149 lectures worldwide, conducted countless courses, and seminars. Barutcugil has opened or participated in more than 156 exhibitions, 60 of them abroad.

His works can be seen in many museums, including one at the British Museum (London, UK) that is on permanent display. Barutçugil has published twelve books; “Infinity of Colours”, “Colours Dancing on Water”, “The Living Tradition”,  “The Dream of Water: Ebru”, “Black and White Ebru”, “Symmetry”,  “Efsun Flowers”, “Ebristanbul”, “Ebristan’dan Yeşerenler”, “His Compassion”, “Battal’dan Baruta Ebruvan”, and “EbrulîMardin”.

Barutçugil is a lecturer at the department of Traditional Turkish Arts, Mimar Sinan University of Fine Arts (Istanbul, Turkey). He conducts workshops on marbling and other traditional crafts like calligraphy, tezhip (illumination), miniature painting, and book binding at his art centre, Ebristan.