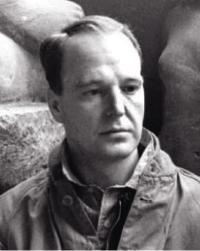 Henry Moore was born in Castleford, Yorkshire 300 kilometres to the north of London on 30 July 1898, the son of a coal miner. His early artistic development, fostered by his teacher Miss Alice, Gostick, was further nurtured by studying sculpture at Leeds College of Art and at the Royal College of Art in London. In during the early 1920s Moore studied the sculpture of other cultures at the British Museum: Aztec and Egyptian works had a great impact on his imagery. He also began to travel regularly to Paris regularly meeting artists and furthering his knowledge of European art. His first solo show in London was geld at the Warren Gallery in 1928. His carvings in the late twenties and thirties attracted much press criticism, with charges of ugliness and distortion of the human form. Moore however continued in the face of this hostility, with the growing support of the art establishment and friends such as Herbert Read and Kenneth Clark, who was Director of the National Gallery. Moore’s drawings of people sheltering in the London Underground during the Second World War brought his work to a larger and more sympathetic public. In 1940 he moved from London to Much Hadham in Hertfordshire, one of ‘home’ counties surrounding the city, where he lived with his wife Irina, whom he had married in 1992, until his death in 1986. His work progressed through the years, exploring themes on the reclining figure and the mother and child, with brief excursions into other areas of enquiry such as animals and natural forms. All of the subjects that concerned him were explored in sculpture – carved in many different stones and wood, or cast in bronze – in drawings and in prints. As his reputation rose, his establishment grew, to an atelier with several assistants who helped to enlarge his work to monumental scale. Moore was the recipient of many awards and honours. He was awarded the first International Prize at the Venice Biennale in 1948, thus beginning a long and close relationship with the British Council. His work has been exhibited worldwide and is represented in major national collections. In 1977 Henry Moore formed the Henry Moore Foundation, a charitable organisation which administers the allocation of grants, bursaries and scholarships to promote sculpture within the cultural life of Britain. The Henry Moore Foundation also cares for the artist’s studios and for a large collection of Moore’s sculptures, drawings and graphics. Prints 1950-1981 Between 1931 and 1984 Henry Moore produced 719 different graphic works, over 600 coming after 1969. The pressures of old age, which made work on sculpture physically tiring, and worldwide commercial demand, with its insatiable appetite for something new, led to an outburst of activity in print making during the last 15 years of his life. The works in this exhibition have been selected from the magnificent gift of over 200 prints that the artist gave to the British Council Collection in 1984 to mark the 50th anniversary of its founding. Moore had always been a consistently active draughtsman and this enriched his graphic output. Sometimes the artist would set out to create a group of prints with the intention of publishing them as a set, on other occasions publishers would suggest a subject and take responsibility for every stage of production. On other occasions prints were made as part of another project, a book for example, and occasionally a group of prints were intended for a portfolio which failed to materialise.