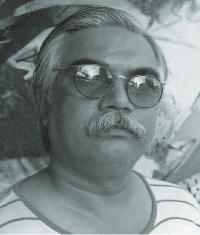 Hashi Chakraborty graduated in 1973 and did his B. Ed from the University of Chittagong in 1991. To date he has had seven solo exhibitions in Chittagong and Dhaka including two in Sweden (1994). As part of a group, Chakraborty participated in 23 exhibitions since 1967. His works have figured in nine Asian Art Biennials from 1981 to 1999. He found exposure, among other places, in Bombay, Delhi, Dresden, Hong Kong, Sofia, London, Kuala Lumpur, Harare and Fukuoka. His participation in notable exhibitions include the Graphics Show of Selected Artists of Bangladesh held in Warsaw and Belgrade in 1977, the Bangladesh Exhibition at White Chapel Art Gallery in London (1984), Drawing Exhibition in Czechoslovakia (1984) and Kuala Lumpur (1985), the Asian Art Show held in Japan in 1985 and 1987, the Seoul Contemporary Asian Art Show held in South Korea in 1986, the Fourth Havana Biennial held in Cuba in 1991, the Boner Summer Festival held in Germany in 1999. His awards include Honorary Second Prize at the First Young Painters Exhibition organized by the Bangladesh Shilpakala Academy in 1975. Two years later the same Institution conferred upon him the Best Award for Work in All Media.