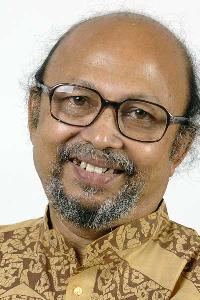 As one of the modern pioneers who entered the art scene in the late 1950s, Hashem Khan’s vision has evolved within the developing nationalist narrative linked with the political upheavals of his time. He was born in 1941 in Chandpur, Bangladesh. The quaint rural setting fed the young Hashem Khan’s imagination. The painter who would later spend a large part of his time and energy into illustrating children’s books and ensuring art education for children.

The artist continues to identify with progressive political and cultural movements in the country.  The Liberation War of 1971 is a major theme in Khan’s works. He belongs to the abstract school of painters and like many of his contemporaries, focuses on rural Bangladesh for inspiration.

Hashem Khan graduated from the Government Art Institute in 1961. He received training in book design and Illustration from ACCU, Tokyo, in 1979. He taught in the Institute of Fine Arts, Dhaka, for 44 years and retired in 2007. Khan is a founder member of the Dhaka City Museum. His contribution to the cause of children is widely recognised. He has also authored several books. Hashem Khan received the Ekushey Padak in 1992 and the Independence Day Award in 2011.  A freelance artist and social activist, Hashem Khan lives and works in Dhaka.