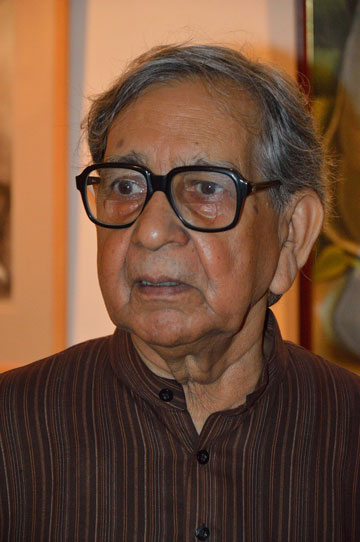 Born in Jamalpur, Bangladesh, Ganesh Haloi was forced to migrate to West Bengal during the tumult of Partition. Upon completion of his graduation from the Government College of Art and Craft, Kolkata, Haloi joined the Archaeological Survey of India as a resident artist and was assigned the documentation of the cave paintings of Ajanta from 1957-63.

Haloi began his artistic career in the sixties. Perhaps the picturesque landscapes of his lost homeland, imprinted as childhood memories, inspired in him the imagery of tender, verdant, moisture-laden lands in his paintings. Human presence was erased from his visual panorama, giving way to a sublime conversation between land and sky, air and water. Haloi transitioned from realism to a uniquely styled abstraction, which is deeply poetic and goes far beyond visual documentation.