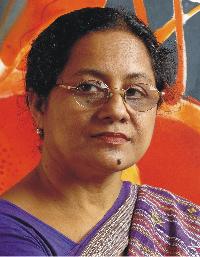 Farida Zaman’s calm and composure, both in her personal life and work, is transmitted through a special sensitivity and characterisation in her art. A noticeable feature of the artist’s works is the depiction of riverine life in Bangladesh. Her works articulate the lives of fishermen. Zaman’s line drawings are one of her strongest traits.

Farida Zaman was born in Chandpur, Bangladesh, in 1953. She graduated from the Bangladesh College of Arts and Crafts in Dhaka in 1974. She received a master’s degree from the MS University in Baroda in 1978 and went on to receive a doctoral degree from Visva Bharati, Santiniketan, in 1995. Her days at Santiniketan spent under the tutelage of K G Subramaiam were foundational in setting the tone of her artistic vision. Zaman’s works have been widely exhibited. in  Notable among her awards are the Commendation Award at the 5th India Triennial (1982), the Australian government’s Cultural Award (1985), National Book Center Award for Children’s Book Illustration (1986), the International Life Membership Award of the Salon de Tokyo, Japan (1986), Bangladesh Mahila Parishad Award (2009), Sultan Padak and Ekushey Padak (2020). Her works have been widely exhibited. Farida Zaman is a professor in the Department of Drawing and Painting at the Faculty of Fine Arts, University of Dhaka.