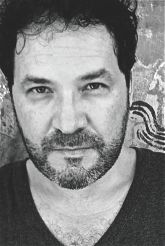 Dutch – Guatemalan artist Carel Richter was a student at the Royal Academy of Art and Design in The Hague, Netherlands. There he took part in the post expressionist movement Inspe, a form of contemporary experimental expressionism established in the eighties. He was deeply influenced by late expressionist artists such as Edvard Munch and had taken up symbolist painting. He is recognized for his powerful images of anxiety, isolation, rejection, sexuality and death; many of which reflect his experience as a diplomat who specialized in human rights and conflict. Carel was born in Amsterdam, Netherlands, in 1967 to a Dutch biologist and Guatemalan social scientist. When he was five years old, he moved from Amsterdam to Zaire with his family, which was the first of many countries Carel would call home. Growing up partly abroad and surrounded by inspiring people from the political, scientific and artistic fields, triggered in him a need to create art with a social message. In 1985 Carel joined the Royal Academy, the respected institution from which Vincent van Gogh graduated. He studied design, architecture and general art courses under Dutch painters Lucerbert (Lubertus Jacobus Swaanswijk), Herman Brood and Hendrik Maarten Krabbé. Carel quickly discovered his own unique style and from 1987 was working independently in a rented studio. An example of his work from this period is The Consensus which is on permanent exhibition in the new Dutch Parliament in the Hague. He has since exhibited widely in Europe and South America. Carel’s style of painting can be described as sketchy; appearing unfinished, the surfaces are scrubby and scratched, the rough texture adding to the overall impression of movement. He uses mixed techniques including photo collages, computer imaging, and metal printing, employing modern materials and carefully arranging his compositions in order to create dynamic scenes. Carel has a rare ability to portray intimate emotions in a universal way, so that a spectator can easily recognize themselves in the work. Carel has had important solo exhibitions at the National Gallery of Modern Art in Rome, Arndt in Berlin, Museum 52, Criterion in Amsterdam, and Pulchri Studio in the Hague where he exhibited over 400 works. Later in 2000, Carel carried this show to America. He has received prizes in the Netherlands, Italy and America. This is his first solo exhibition in Asia.