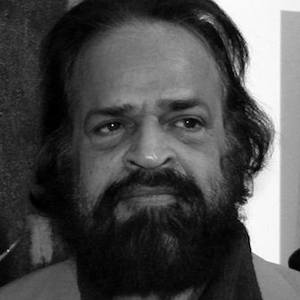 Abstract artist, Achuthan Kudallur, is a well-regarded name in the South Indian contemporary art scene alongside famous artists such as Laxma Goud, R.B. Bhaskaran, T. Vaikuntam and K.M. Adimoolam. Born in Kerala, Kudallur is one of only a few artists in the collection who are self-taught. The most formal teaching he received was in evening art classes at the Government College of Arts & Crafts in Madras. The artist is a colourist, first and foremost, an abstract painter second. It is his passionate love of individual colours that led to his feelings of non-necessity in regard to figuration in his paintings. He gave it all up to deal with colour itself and, looking at his canvases, he has found much to busy himself with. Each painting takes a colour as a source of inspiration. He describes each of them with affection as ‘his blue’, ‘his yellow’ or ‘his red’. His works are oddly instinctive and emotional; in an expressionist vein though simultaneously (and paradoxically) the result of systematic thought, an almost algebraic decipherment and recreation of colour on the canvas where the dots, dashes, brackets and crosses are still visible in the final work. The artist himself is a charismatic, intelligent figure though also shy and emotional with regard to criticism or speculation by his audience. This is especially true in relation to his choice of abstract art. For Kudallur, abstraction is far from an easy way out. One sees a man who is frustrated because, try as he might, he cannot fully verbalise the process of what happens when he approaches a colour or single mark on the canvas; nor the balance he attempts to achieve in the piece before he is finished and happy. Furthermore, he believes that, ironically, the difficulty of such work is best described by the work itself. In a strange way, this is why Kudallur’s colour paintings continue. They will do so until he feels he has created the purest of messages about the mystery of what and why he paints what he does. Between the two red ‘Untitled’ 2007 paintings, one in acrylic and one in oil, Kudallur demonstrates a tremendous intensity and depth. The works are good examples of the bright, decorative aspect within his art also. One often feels that describing it simply as a red canvas, mimicking the artist’s words, seems accurate. On the one hand, it somehow limits the colours vastness, thus divorcing it from exaggeration; on the other, by not attempting to create inadequate expressions to bolster the type of red it is, it adds to the meaning and profundity of the simple description. In this way his canvases seem limitless and finite in the same stroke of the brush.