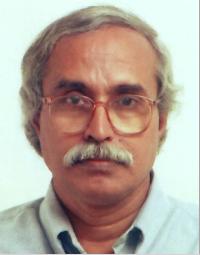 Born in 1949 in Pabna, Bangladesh, Alvi discovered his skill in drawing after he enrolled with the children’s organisation Kochi Kanchar Mela. Encouraged by his father, he went on to graduate from the Government College of Arts and Crafts in Dhaka, in 1967. His formative years there were spent under the tutelage of the distinguished painters Mohammad Kibria and Safiuddin. A cultural exchange programme enabled Alvi to study printmaking under Michael Ponce-de-Leon. In 1983-84, he did post graduate research under Naomi Asakur at the Tsukuba University in Japan.

Drawn into the vortex of political upheaval and the war of 1971, Alvi participated in the front lines and suffered in the hands of the Pakistan army. Much as the trauma of war strengthened his resolve, it also honed his expressive qualities. Alvi’s quiet persona is reflected in his nuanced palette. His deep identification with the land and the rivers shaped a unique style of abstraction, which is revealed in a carefully crafted geometry of landscapes with loosely juxtaposed organic shapes. Alvi is twice recipient of the National Book Center Award. He received the Megothi award (1981), the Agrani Bank Award (1996) and the S M Sultan Padak (2008). Abul Barq Alvi is a retired professor in the Faculty of Fine Arts, University of Dhaka.